Get Radio Airplay - A Radio Promotion Guide for Musicians

On 08 August 2016 under Music Marketing, Starting a Band, Running a Band, Get Your Band on The Radio, Radio

Get Radio Airplay - A Radio Promotion Guide for Musicians

On 08 August 2016 under Music Marketing, Starting a Band, Running a Band, Get Your Band on The Radio, Radio

Getting radio airplay can be one of the most powerful drivers of a large, densely populated fanbase for musicians.

AM/FM Radio is still the number one source of music discovery, according to a survey conducted by Edison Research and Triton Digital.

In fact, the survey found that the number of people using radio to discover new music was more than three times that of YouTube.

Here are the results when survey respondents were asked which source they use most to find new music: 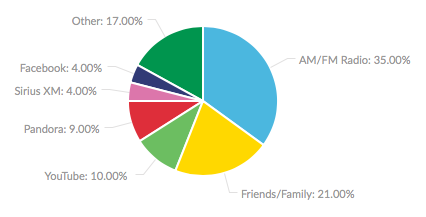 It's no question that radio promotion is a valuable marketing channel for musicians. One spin can reach hundreds, or even thousands of people.

So, how can you get your song played on the radio? Here's a guide to get you started.

When you're implementing a radio promotion strategy with your album release, it's important to pick the song that's going to perform best on the radio.

Radio stations want their current listeners to stay tuned in to their station, and want those who are flipping through stations to land on theirs and keep listening.

When choosing which song to promote to radio stations, pick one that has a low number of skips, and a high listener retention rate. You can get metrics like this by uploading your music to YouTube, applying some music video promotion strategies, and analyzing viewer metrics. The song that keeps viewers the longest and has a low number of skips is most likely the one that you should promote to radio stations.

If all of your music has low listener retention, you're probably not ready to promote your music to radio stations.

There are two types of radio stations - commercial, and non-commercial.

How to Send Your Music to Radio Stations

Remember, pitching music to radio stations is a sales process. Before getting started with your radio promotion efforts, I'd recommend educating yourself on the arts of cold calling and direct mail, as these strategies will be heavily used when promoting and selling your music to radio station program directors.

When you're ready to get started with radio promotion efforts, make sure you start reaching out at least four weeks before you'd like your song to be added to their playlist.

1. Make a List of Target Stations and Program Directors

It's important to choose radio stations that are actually going to be interested in your style of music. It doesn't make sense to spend your time reaching out to hip-hop stations for your new rock song.

Once you find a list, go through and identify the radio stations you intend on sending your music to. Create a spreadsheet that contains the following information for each station:

If you can't find the program directors name and contact info on the radio station's website, you can try searching LinkedIn or Facebook for the info.

For Facebook, you can enter a search term, then select the "people" tab for profile results. Here are some search strings you can try to find a radio stations program director:

After you've put together your list, it's time to start sending promo CD's to the radio stations.

Be careful about confusing promo CD's with demos. DO NOT send demo's to radio stations. You want to send complete, well produced tracks since they will be using the music from the promo CD's on the air if they decide to add your music to their rotation.

Here are some things to look out for when sending your promo CD's to radio stations:

When sending your promo CD's, use first-class postage so you can properly manage follow-up timing.

If you want to get your music heard by the program directors, follow-ups are a must.

About a week after sending promo CD's to radio station program directors, follow up with a phone call to make sure they got the package, ask if they got a chance to listen, and solicit initial feedback.

If they haven't gotten a chance to listen yet, ask when would be a good time to follow up with them again. If they say Wednesday at 2pm, mark your calendar and follow up at exactly that time.

If they did listen, and the feedback sounds positive, ask if they're going to add it to their rotation. When trying to convince them to add it, speak in numbers - use results from rotations on similar radio stations, or sell them on metrics about how your music is performing online.

Here are some things to keep in mind when making phone calls to radio stations:

For more tips on communicating over the phone, check out this infographic.

Radio promotion is a numbers game. For every 100 radio stations you send your music to, maybe only 1 or 2 will play it, but if those that do play it have a large number of listeners, it will be worth it.

If you've never promoted music to radio stations before, it's likely that you won't get many results from your first attempt - and that's okay. Learn from the experience, and apply your newfound knowledge to your next release.

Promoting your music to radio stations on your own can be a daunting task that takes away time from creating music.

If you have the budget, hiring a radio promotion company to manage the campaign for you will allow you to focus on other things, and may result in better conversion rates.

The cost of outsourcing radio promotion is estimated to be around $1,800 to $2,400 depending on whether you're promoting a single, EP, or full album. Another expense to account for is postage, which would be around $750 to send out 300 CDs.

If this is the route you want to take, here are some reputable radio promotion companies you can reach out to:

Did we miss something? Let us know in the comments!